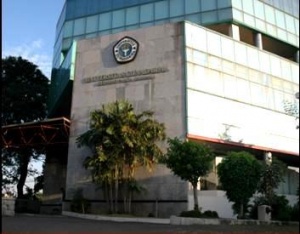 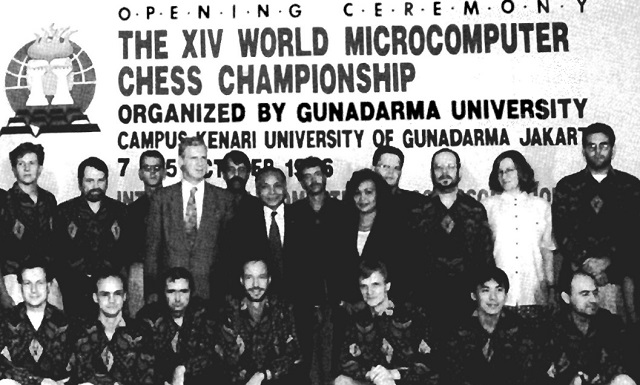 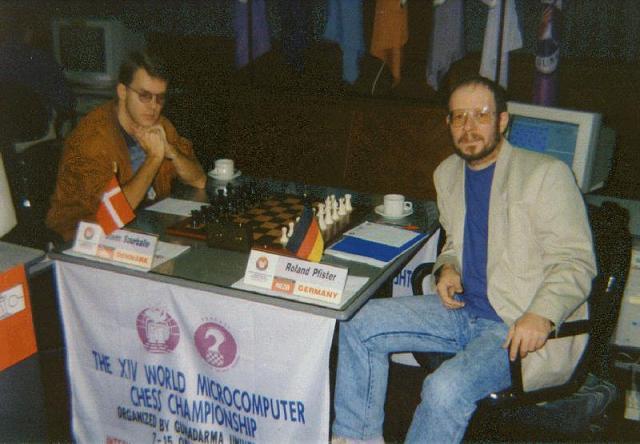 The de facto ban of the Junior team [22] [23] [24] was another main issue, which caused potential participants evince solidarity with the Junior team - to boycott the championship or withdrawal after already registered. For the one or the other honorable reason Richard Lang, Ed Schröder, Chris Whittington, Vincent Diepeveen, Walter Ravenek [25] and others did not participate with their programs. Other programmers voted for not mixing political issues with sports or were more or less conform with the ICCA point of view.

The field of participants was dominated by 12 German entries, but only one Dutch, which was the program Fritz of the German ChessBase company, by Frans Morsch from The Netherlands and Mathias Feist from Germany. This matter of fact may be caused by Appeal to authority and Netherlands former relations to Indonesia and pronounced sensibility about the Suharto regime and symptoms of Antisemitism associated by the de facto ban of the Junior team due to their nationality [26] . The ICCA felt obligated to fulfill the contract they made with the main sponsor and host, and claimed financial suicide to turn it down [27] . 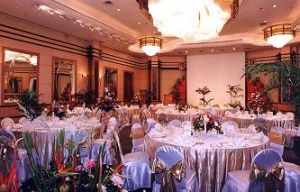 The tournament circumstances were kind of tremendous: The subsidized accommodation in the class hotel Dai-Ichi (now Aston Atrium [29] ) - where also the opening ceremony with Indonesian Minister of Education and Culture, Wardiman Djojonegoro [30] and Rector of the Gunadarma University, Prof. E. S. Margianti [31] , took place - was quite luxurious. All participants received Batik shirts as gift and had personal hosts from the university, not to mention the sponsored flights for a (limited) number of participants, the excursion to Bogor, the excellent food between rounds, and closing dinner and whatever else. A minor drawback was the organized bus transfer between the hotel and playing hall. While the buildings, specially the playing hall was well air-conditioned, the bus was not and sauna like. With the consequence that most participants catches a cold from the second day. During the tournament there was a huge local press and TV-coverage. For security, police or military staff was aboard at the entrance of the tournament hall in the modern and comfortable university building where the tournament took place. The price award ceremony was accomplished by ICCA President Tony Marsland, Rector Prof. E. S. Margianti, and Minister of Public Housing, Akbar Tanjung.

Experience is a Hard Teacher

A point of criticism and a negative precedence was the concession of the ICCA to let the host's program Gunda-1 of the Gunadarma University participate. It was a clone of Crafty, which also participated as well [32] [33]. On the players meeting it was agreed, that Crafty had to play Gunda-1 in the first round as proposed by the TD - to avoid possible later issues if it turned out, both programs may fight for the title. Also, no other program should play both. Gunda-1 won that game against Crafty and finally both programs finished 4th (Crafty) and 5th. Crafty had a strong tournament and won some nice games with 4. Bc4 instead of 4. Ba4 in the Ruy Lopez [34], which apparently threw most opponents out of book.

Other issues were related to unexperienced operators, not member of the programmers team, which caused Tournament Director Jaap van den Herik to do a lot of hard work and decisions almost each round. Another problem was the missing ability to produce valid PGN by various programs. The most time consuming case was the Heureka versus Schach 3.0 game in round 8, where around move 40 one got aware the external and internal board position in Schach 3.0 was divergent due to an operator error a few moves before (unfortunately the chess boards had no coordinates). On the other side, due to an en passant capture, Heureka was not able to take back the moves or even to start from any arbitrary position, but had to reenter the whole game - which was a bit error-prone due to interface issues and had to be done at least twice until the game could continue.

The distinction between professionals and amateurs was justified to encourage hobbyists in participation and to reflect the commercial value of the title for the professional programmers likely associated with companies. However, after the "golden age" of dedicated chess computers the distinction became more difficult and the rule applied by the ICCA was a kind of ambivalent due to the definition of a relative income of 25 per cent from computer chess.

Engines like Nimzo and IsiChess were already commercial. Their authors affirmed their relative and absolute low income from selling their programs, which was generously accepted by the ICCA officials. Other possibly semi professional authors, who observed a below 25 per cent income, were considered full professionals by the ICCA. That was true for Marc-François Baudot and Jean-Christophe Weill with Virtual Chess [35] , and Chris Whittington with Chess System Tal and associated with Oxford Softworks, who developed and traded not only chess programs but other strategic games as well.

Quotes from Experience is a Hard Teacher by ICCA President Tony Marsland [36] :

The tournament was an 11 round accelerated swiss system [37] , the first three rounds were paired from two disjoint groups. The 14th WMCCC was the first victory of Stefan Meyer-Kahlen's Shredder, with half a point ahead of Bruce Moreland's Ferret. Shredder lost against the unbeaten Ferret in round 8, but Ferret made too many draws and got unlucky second place finisher. Ferret's win of the Blitz Title was a slight compensation though. Virtual Chess as sixth, won the title of the Professional World Microcomputer Chess Champion after a playoff against Fritz, since the leading five programs were all (still) amateurs.