Difference between revisions of "Repetitions" 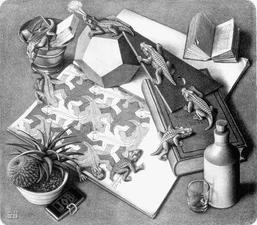 Repetitions of positions may happen during game play and inside the search of a chess program due to reversible moves played from both sides, which might be nullified in one or multiple further reversible moves. The player to move may claim a draw if the same position occurs three times, or will occur after an intended move, in any order, with the same player to move.

Two positions are considered same or equal, if all occupied squares and kind of pieces (not necessarily the same piece) they occupy are the same, the castling rights for both sides did not change, and no en passant capture was possible during the first occurrence, even if obviously not played.

Threefold repetition implies a position occurred thrice, that is repeated twice. When to score the position as a draw, however, is an entirely different matter. Most programs do this on the first repetition, no matter whether the first occurrence of the repeated position appears in the current search space, or not. Other programs consider that fact, they avoid cycles inside the current search tree to make it a directed acyclic graph (DAG), but allow a one-fold repetition, if the first occurrence appears in the game history before the current root. Anyway, to wait for the second repetition one has its pros and cons. The Repetition score is either zero or the contempt factor.

The rules of chess state a threefold repetition of a position gives the player to move the option to claim a draw, no matter whether the threefold repetition already occurred yet, or is about to occur after declaring the intended move in conjunction with the draw claim. The latter case is a bit tricky for computers, and is/was likely not strictly implemented in most programs or their user interfaces, since a draw message text or box appeared after the repetition occurs but no claim before. Since July 2014 a fivefold repetition is sufficient without any claim [2].

A former (German) rule, was believed to be sufficient to make the game of chess finite [4] :

was proved not sufficient by Max Euwe in 1929 by applying the Prouhet–Thue–Morse Sequence [5] , i. e. with following move indices [6] :

Euwe's prove was the reason, two other rules in force each of which guarantees chess to be a finite game, threefold repetition of positions and the fifty-move rule.

By position we mean the location of all the pieces on the Chessboard as well as castling rights and en passant status. Since the rule speaks about the piece position, and not their identity (i.e. artificially constructed repeated position where the rooks of one player changed places still would be a draw), repetition may be detected by using the Zobrist- or BCH signatures of the position.

One possible implementation was used by Ken Thompson in Belle, who told Bruce Moreland that he detected repetitions by using the transposition hash table, as follows [7] :

Most programs use an array or list of Zobrist- or BCH-keys and compare the current signature with keys 4, 6, 8 and so on plies along the actual variation. This is usually quite cheap, since testing often does not require looking through the entire list, since captures and pawn moves, that reset the halfmove clock for the purpose of enforcing fifty-move rule are known to make a repetition impossible. Since each thread or process may own its own copy of the game-record, this approach has also some merits in parallel search implementations.

John Stanback about his implementation in Zarkov [8]:

Some programs, like Gerbil or Rookie use a separate small hash table, actually an implementation of a Bloom filter revealed by Ronald de Man as mentioned by Marcel van Kervinck in his thesis The design and implementation of the Rookie 2.0 Chess Playing Program [9]:

An alternative, pragmatical approach based on repetitions of moves was proposed by Vladan Vučković and Đorđe Vidanović in 2004, as implemented in Axon [12] and discussed in CCC [13] [14].

The algorithm needs a move list containing the game record including the variation actually searched, 16-bit entries with origin and target square, and a flag whether a move is irreversible, as only information required. Starting with the last move made, the list is scanned backwards as long there are reversible moves. A local concatenating list of up to 24 entries (one entry for each piece able to make reversible moves) is used to determine cycles per piece, where consecutive moves on their target squares are merged to one "pseudo" move, using the earliest origin and the latest target square. If all distinct white and black moving pieces in the chain list contain equal from- and to coordinates, all cycles of moves are closed and a move repetition is detected. This is how the algorithm as given in the paper in 8086 assembly looks in pseudo C++, square coordinates are offset from a 12*12 mailbox approach, so that empty entries have no valid square index.