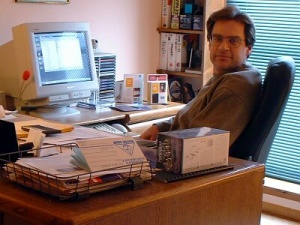 John Stanback,
an American electrical engineer and computer chess programmer. He started chess programming in about 1978 with Basic and Fortran, until he switched to Pascal and in 1986 to C. His early program SCP (Stanback Chess Program), was already published in 1987 as open source in comp.sources.games [2], and later evolved to GNU Chess. In 1989 John Stanback did a complete rewrite and called the new program Zarkov [3], which was subject of experiments with various ideas until recently. In June 2016, the successor of Zarkov dubbed Wasp was released, announced and hosted by Frank Quisinsky [4] [5].