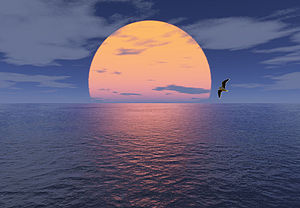 The Horizon Effect is caused by the depth limitation of the search algorithm, and became manifest when some negative event is inevitable but postponable. Because only a partial game tree has been analyzed, it will appear to the system that the event can be avoided when in fact this is not the case. Beside obligatory quiescence search, extensions, specially check extensions are designed to reduce horizon effects.

Quote by Tony Marsland from Computer Chess and Search. [2] :