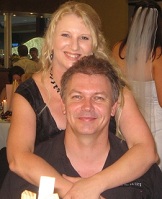 Ross Boyd,
an Australian IT professional and computer chess programmer. He is author of TRACE, an acronym for Tracey & Ross' Australian Chess Engine, which began in November 2002 as a Chess Engine Communication Protocol compatible chess engine based on Tom Kerrigan's TSCP 1.73 code. Ross Boyd has been hooked on computer chess since 1983. The desire to write a chess program drove him to learn the art of computer programming and led to a 25+ year IT career. His first engine written in GFA Basic on an Atari ST chose moves randomly from a list of legal moves [2].