Difference between revisions of "NegaScout"

NegaScout,
an Alpha-Beta enhancement and improvement of Judea Pearl's Scout-algorithm [1], introduced by Alexander Reinefeld in 1983 [2]. The improvements rely on a Negamax framework and some fail-soft issues concerning the two last plies, which did not require any re-searches.

NegaScout works similar to Tony Marsland's and Murray Campbell's PVS [3]. NegaScout's fail-soft refinements always returns correct minimax scores at the two lowest levels, since it assumes that all horizon nodes would have the same score for the (in that case redundant) re-search, which most programs can not guarantee due to possible extensions [4] and possible bound dependency of quiescence search and evaluation. NegaScout just searches the first move with an open window, and then every move after that with a zero window, whether alpha was already improved or not. Some PVS implementations wait until an alpha-improvement before using zero window at PV-Nodes [5].

Reinefeld's original implementation introduces one additional variable on the stack (only b, since after a = alpha, alpha is not needed any longer), for a slightly simpler control structure than PVS. It has therefor set a new null window at the end of the loop (b = a + 1), but has to consider the move count for the re-search condition though. His implementation trusts the null-window score, even if the re-search doesn't confirm the alpha increase, possibly due to search instability.

While re-searching, NegaScout uses the narrower window of {score, beta}, while other implementations dealing with search instability, re-search with {alpha, beta}. Practically, due to Quiescence Search, and fail-soft implementations of PVS, the two algorithms are essentially equivalent to each other - they expand the same search tree [6][7].

Guido Schimmels in a CCC post on the difference of PVS vs. Negascout [8]: 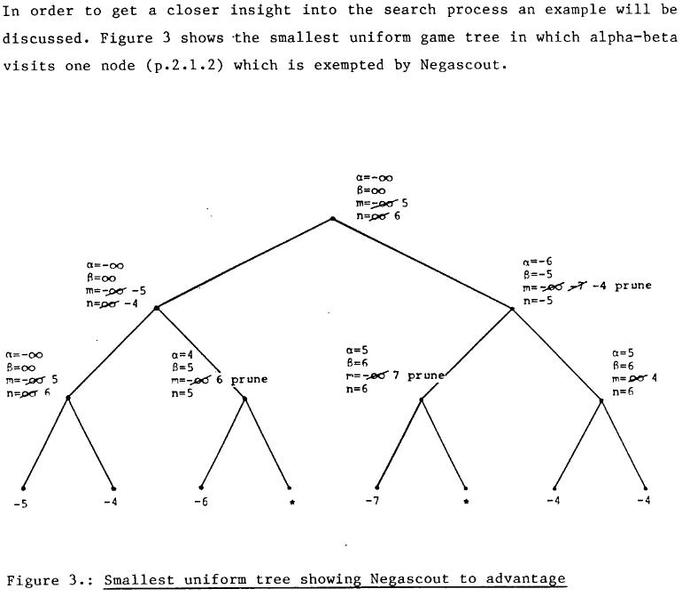