Difference between revisions of "Colossus Chess" 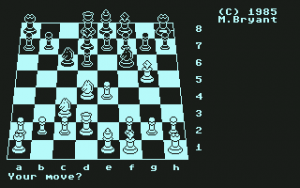 Colossus Chess, (Colossus)
the series of chess programs by Martin Bryant developed from 1983 on an Apple II in 6502 Assembly, based on Bryant's former program White Knight. Colossus Chess 2.0 was the first commercial release in 1884 for the Commodore 64 and this and subsequent versions for other 6502, Z80, 68000 and 8086 based home computers and personal computers, such as Atari 8-bit, BBC Micro, Amstrad CPC, ZX Spectrum, Atari ST, Amiga, and finally for the IBM PC. Colossus Chess pioneered a sophisticated GUI with an optional 3D chessboard, and lot of new features for that time, and has become one of the best selling chess programs of all time [2]. Colossus Chess played the European MCC 1983 in London and the WMCCC 1984 in Glasgow.

While the work on the commercial Colossus Chess series finished in 1991, Martin Bryant started a completely new and freely available UCI version in 2004, running under Windows, first written in C# then converted to C [3], released in 2005 through 2008 [4]. Some features as mentioned in History / Test Results of the Colossus Chess UCI site [5]:

The Colossus of Rhodes (novel)

Lorenz ciphers and the Colossus by Tony Sale, Bletchley Park [6]

The Fall of Colossus
Colossus and the Crab