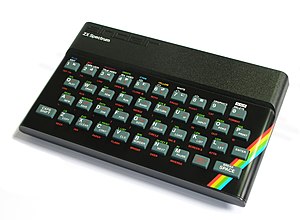 ZX Spectrum,
a Z80A based home computer released in the UK in 1982 by Sinclair Research Ltd. as successor of the Sinclair ZX81. The original Spectrum ran at 3,5 MHz with 16 KiB of ROM containing system-routines and Sinclair BASIC, and either 16 or 48 KiB of RAM, a rubber keyboard, and a simple color graphic display of 256×192 pixel or 32 columns × 24 rows of 8x8 characters through an RF modulator and television. An enhanced but largely incompatible version of the Spectrum was marketed in the USA by Timex as the Timex Sinclair 2068 [2], released in in November 1983. The ZX Spectrum +3, released in 1987, had a built-in 3-inch floppy disk drive, capable of running the CP/M operating system [3].

The Spectrum ZX Vega, first released in April 2015, is a modern redesign of the ZX Spectrum in the form of a game console. Announced in 2014 and crowdfunded on Indiegogo the Vega was endorsed by Sir Clive Sinclair, produced by Retro Computers, consisting of former ZX Spectrum games developer Chris Smith, managing director Paul Andrews, David Levy and Sinclair Research.

The planned follow-up of the ZX Vega, dubbed ZX Spectrum Vega+ has been mired in controversy soon after its funding was completed, and Chris Smith and Paul Andrews resigned from Retro Computers [5] and the company was left in the sole control of David Levy [6], until it had been wound up on February 1, 2019 [7].

The introduction of the ZX Spectrum led to a boom in companies producing software and hardware for the machine, World of Spectrum lists 46 chess titles [8], notably the programs SuperChess 3 by Chris Whittington, Cyrus by Richard Lang and Chessmaster 2000 by David Kittinger.