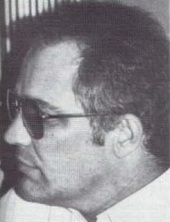 Peter Reckwitz,
was a German representative of Fidelity Electronics, developer of exclusive Fidelity boards such as the Private Line [2], and owner of Remote Control Systems, a company specialized in tuning of dedicated chess computers. In late 1985, Peter Reckwitz single-handedly marketed the RCS Granit based on an overclocked Fidelity Sensory Chess Challenger 9 with a program by Dan and Kathe Spracklen, and later cooperated with Ossi Weiner on tuning Mephisto and Fidelity computers. Peter Reckwitz died in a car accident on June 15, 1989.

During the round 5 game at the WMCCC 1983 in Budapest, Prestige Challenger versus Mephisto X, Reckwitz had some dispute with Ossi Weiner, but they reconciled the next day after a draw was adjudicated [3], and later even became business partners.