Chenard,
an open source chess program by Don Cross, written in C++. Its development already started in 1993, and it is maintained and improved until the present. The source code of the didactic program is well structured and documented, is in the public domain with attribution of author's name and web address required in distributed works [2]. A Windows version comes with an own GUI, other versions for Windows and Linux support the Chess Engine Communication Protocol aka WinBoard or XBoard, its own native command line interface, or teletype chess.

Chenard provides a genetic algorithm framework for evolving move ordering and evaluation heuristics. The board is represented by a 12x12 mailbox with disjoint piece flag encoding. Since Chenard isn't negamaxing, search, evaluation as well as move generation routines are implemented separately for White and Black.

Chenard's search is pure alpha-beta with transposition table, despite quiescence search and its top layer with checks, without any selectivity in form of extensions, forward pruning and reductions. The root search implements iterative deepening without aspiration windows. The depth parameter, suited to index a ply stack, starts at the root with zero and is incremented through the indirect recursive function calls until the the maximum depth, dubbed level, is reached and quiescence is called [3].

The evaluation looks sophisticated considering a bunch of features, many part of Chenard's genes. Beside the aggregation of material, imbalance terms and piece-square tables, which decides on an early exit aka lazy evaluation, Chenard looks at immobile and connected pieces, along with various piece specific evaluation features, and further takes pawn structure with focus on passed pawns, king safety, and even tactical motives such as pinned pieces and forks into account. Beside, Chenard has a mop-up evaluation for late endgames like KBNK.

Chenard has its own depth to mate endgame databases, generator and probing code [4] [5] [6]. 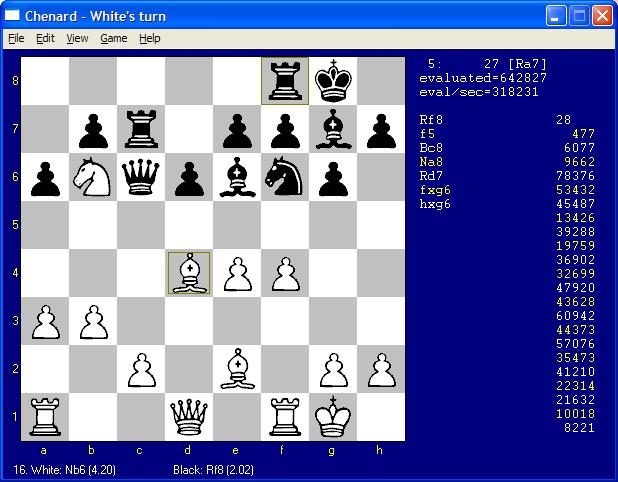