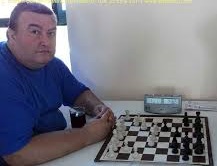 Harun Taner, (October 3, 1966 - May 2015)
was a Turkish naval engineer and researcher, writer and publisher of chess [2] and literature periodicals [3], multilingual blogger, chess player, computer chess aficionado and tester. Harun Taner graduated in 1988 from Istanbul Technical University, in the 90s, he was affiliated with the Technical University of Berlin. He survived the 1999 İzmit earthquake, since 2000, his residence was in Antalya. Harun Taner died in May 2015 at age 48 [4].