Difference between revisions of "Zillions of Games" 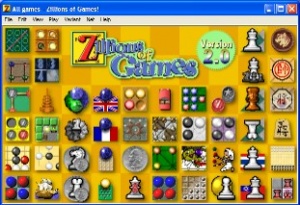 Zillions of Games,
a commercial general game playing Windows program developed by Jeff Mallett and Mark Lefler to play abstract strategy board games with perfect information and up to 32 players, first released in 1998. Zillions of Games 2, released in 2003, comes with 100 new features, able to enforce maximal capturing rules as used in some versions of Checkers, and is packed with 350 board games, puzzles, and variants [2], including chess and 60 chess variants. Zillions further supports randomness in games through a special, computer-controlled "random player" that chooses its moves randomly, which allows to simulate dice games.

The game rules are specified by the Zillons rules language, persistant in ASCII readable Zillion rules files with the extension zrf [3], based on Lisp like S-expressions:

Besides defining how pieces move, Zillions can define how pieces may be dropped. All piece and board graphics referred in the rule files, are required in Windows BMP format.