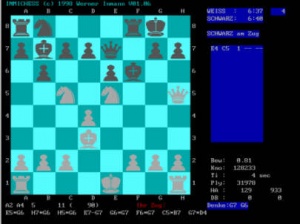 InmiChess,
a WinBoard compliant chess engine by Werner Inmann, written in C, also previously available as MS-DOS program with an own GUI, and as native ChessBase engine. After inspirations from a Donninger article and Steinwender's and Friedel's book Schach am PC [2], Werner started to write ImniChess in 1997. After implementing alpha-beta with quiescence search and evaluation based on piece-square tables, ImniChess saw the light of day in 1998, subsequent versions were further improved by a transposition table, null move pruning, razoring, and various extensions. In 1999, after exchanging ideas with Steffen A. Jakob, author of Hossa, Werner tried bitboards to implement more effective pattern recognition for a more sophisticated evaluation, but soon changed back to mailbox [3]. Since version 2.17 released in August 1999, InmiChess is able to probe Nalimov Tablebases [4].