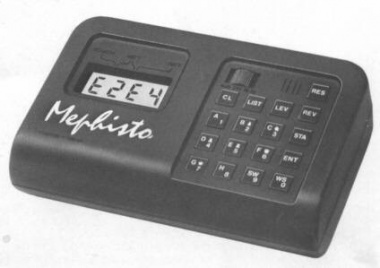 Mephisto,
a family of dedicated chess computers, produced and traded by Hegener & Glaser since 1979 with programs of Elmar Henne and Thomas Nitsche. Short after winning the World Microcomputer Chess Champion title at WMCCC 1984 in Glasgow (shared), Hegener & Glaser abandoned the collaboration with Henne and Nitsche [2], and started to work with Richard Lang in continuing the Mephisto brand name, later also with programs of other professional chess programmers like Frans Morsch, Ulf Rathsman, Ed Schröder and Johan de Koning.

The Mephisto project started with an ordinary 2 line classified column "...we are looking for a chess programmer ... " by Mr. Horváth, which was discovered by Elmar Henne, who contacted his fellow student Thomas Nitsche from Technical University of Munich, who was already a well known chess programmer. Nitsche and Henne soon founded their own company P1 GmbH to focus on computer chess. When Mr. Horváth sold the whole stuff to Hegener & Glaser, a four year collaboration started in 1980.

The mighty Mephisto I and II chess computers with their unique Briquette design ran on the RCA 1802 8-bit CMOS processor with 6 KiB of a 8KiB ROM and one KiB of RAM, the Mephisto II, released in 1981, doubled the memory sizes. The opening book was supplied by Ossi Weiner [3]. The programs were based on Nitsche's former program Orwell - a mixture of Shannon Type A and Type B strategy. The first plies of a brute-force alpha-beta search were extended by a selective layer of plausible moves [4], no quiescence search, but SOMA like exchange evaluation [5].

The new Mephisto III program was written in Compiler Description Language CDL2 for high abstraction with chess pattern terms, but only 1.5-2.0 times slower than assembly. It was further possible to compile the program for different target processors. While the default Mephisto III Briquette model as well the first modular Mephisto MM I, first released in 1983, still had an 8-bit RCA CMOS processor, now with 32 KiB ROM and 4 KiB RAM, the Mephisto III-S and Mephisto Excalibur were shipped with Motorola's 68000 16-bit processor. Mephisto III-S won the the World Microcomputer Chess Champion title at WMCCC 1984 in Glasgow (shared with three other computers) [6].

The programs of Henne and Nitsche were famous for their very small and selective "humanlike" search trees [7] [8] . Translated quote from Das Mephisto 3-Projekt [9] :