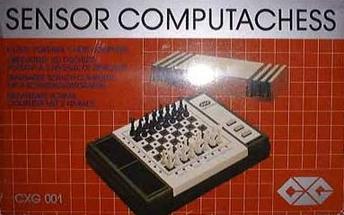 CXG Sensor Computachess,
a dedicated chess computer with integrated travel sensory pegboard. It was the first own computer under the brand name CXG, manufactured by White and Allcock, the forerunner of Newcrest Technology [2] [3] [4]. It was in 1981, when Eric White started to collaborate with David Levy and Kevin O’Connell on the software for the dedicated units. Levy and O’Connell were just in the process to loosen their relationship with SciSys, and their company Philidor Software was about to become Intelligent Software at that time.

The Sensor Computachess had a Hitachi HD44801 4-bit CMOS microcontroller with 2 K of 10-bit word ROM inside, 128 10-bit words of pattern ROM supported by pattern generation instructions with table lookup capability, and 160 nibbles or digits (80 bytes) of RAM. Philidor Software already had a program for that architecture, developed by Mark Taylor under guidance of Levy, marketed by SciSys as Mini Chess, Junior Chess and Graduate Chess.

The CXG Computachess III, released in 1984, had a 6800 instruction set compatible Hitachi HD6301V1 8-bit controller with 4 KB ROM and 256 byte RAM and the LogiChess program by Kaare Danielsen inside [10] .