Andrew Koenig on the individual roles of the programming team [3] 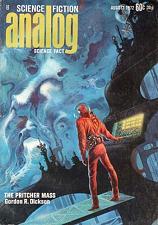 In his essay The Computer Was a Fish, published in Analog Science Fiction and Fact, August 1972 [6], George R. R. Martin mentions the ACM 1971 and a computer chess program called CCCP, which had a certain Mr. Benjamin Yalow on the team [7]. The essay inspired Charles F. and Charlie Wilkes to write their program The Fox [8].