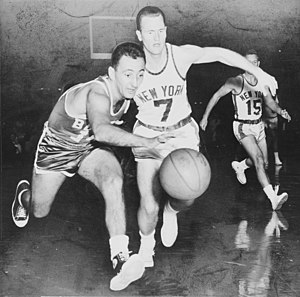 Guard Heuristic,
a move ordering and pruning heuristic introduced by Yi-Fan Ke and Tai-Ming Parng in the 1993 ICCA Journal, Vol. 16, No. 2 [2] . The guard heuristic was successfully applied in chinese chess and compared with the other heuristics such as the killer heuristic, and also proposed for chess. A similar move ordering algorithm was mentioned by Carl Ebeling in his 1986 Ph.D. thesis All the Right Moves [3] , utilizing the value of the moving piece, the value of the captured piece if any, and the value of the piece and pawn guards. In contrast, the guard heuristics is based on the guard value of each square, and considers those values not only for target squares but also for origin squares of moves to decide whether the move is searched at all, with a reduced depth, or when.

The guard heuristic aims at both rejecting moves at deep nodes and ordering moves to reduce the search time. Moves with unsafe target squares, that is negative guard values less some margin, are pruned near the tips and the remaining moves are ordered by the Escape-first-if-origin-unsafe, giving priority for most valuable piece, and Capture-first-if-target-safe rules, considering MVV-LVA.