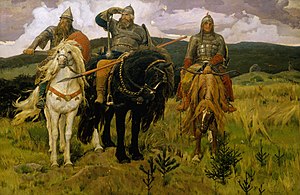 Bagatur (BagaturChess),
a free open source chess engine by Krasimir Topchiyski, written in Java and published under the Eclipse Public License [2] at GitHub [3]. The project has already started around year 2000. Under Windows and Linux the program hasn't its own user interface and uses UCI to communicate with GUIs such as Arena. Under Android, Bagatur comes with an own GUI, also incorporated as engine of Chess Art For Kids [4].

Bagatur (βαγατουρ or βογοτορ) is a higher rank of proto-Bulgarian warrior. According to some authors the word comes from Turkic (bagadur) and literally means brave, brave man. According to the same in the Russian language will pass as Богатыри - hero.

The programming code is structured in multiple Java modules / APIs, which could be used separately, including modules for experiments with artificial intelligence and machine learning. More details could be found inside the readme files of each sub-project of the programming code [5]. The board is represented as a mixture of mailbox arrays, pieces lists and bitboards.

The main interface of Bagatur's search API is the bagaturchess.search.api.IRootSearch class, which is used directly from the IUCISearchAdaptor implementation located in the package bagaturchess.search.impl.uci_adaptor. The interface has three configurable implementations, which support either single threaded search, parallel search, and a mixture of both in order to optimize search effectiveness for shallow depths. All implementations are using the MTD(f) algorithm algorithm based on the PVS alpha-beta search [6] [7].

Bagatur's evaluation consists of a singe layer perceptron so far, using the Neuroph neural networks Java framework. Supervised learning by value adaption is used to tune the weights of the perceptron inputs, featuring material, piece-square tables, mobility, pawn structure, and king safety beside many others. Therefor, one has to feed in a huge number of chess positions with evaluation scores given by a supervisor, for instance generated by Bagatur's UCITracker tool [8] along with strong chess engines like Stockfish [9] [10].