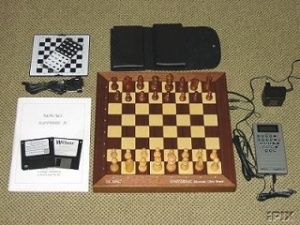 Novag Universal Electronic Chess Board,
a wooden chess board with magnetic sensors released by Novag in 1996 as dedicated chess user interface for compatible Novag chess computers such as Novag Super VIP [2] and Novag Sapphire, or for supported commercial chess programs running on a PC. The board was connected via RS-232 serial interface to the serial port of the computer. The PC programs required a start of a provided driver indicating the com port number. Drivers were available for the MS-DOS chess programs Fritz 1-3, Mephisto Advantage, Genius 3, Rebel 7 and WChess [3], and others, later also for engines running under Windows GUIs, such as ChessPartner [4], WinBoard [5] and Arena.