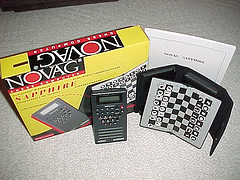 Sapphire I with magnetic chess board [1]

Novag Sapphire,
a portable dedicated chess computer by Novag with a Hitachi H8 8-bit microcontroller, running a program based on WChess by David Kittinger in 64 KiB of ROM using 129 KiB of RAM including 118 Kib for transposition tables [2]. The pocket computer was released in 1994, along with the desktop Diamond version with a pressure sensory board with the same program. Sapphire and Diamond both support the Novag Universal Electronic Chess Board, and were members of the Novag Super System.