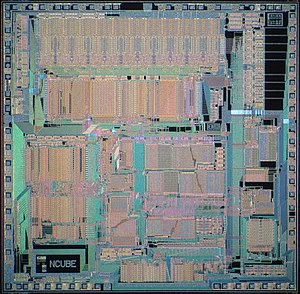 nCUBE,
a series of massive parallel computers based on a hypercube topology performing MIMD, first released 1985 by the company of the same name. The first model, the nCUBE 10 was able to build an order-ten hypercube, supporting up to 1024 CPUs with 32-bit ALU and 64-bit FPU and 128 KiB of RAM per node, also supporting dynamic reconfigurable partitioning the machine into "sub-cubes", that is connected processor teams working on particular sub-problems, such as searching sub-trees in the massive parallel chess program Waycool [2]. The single-chip nCUBE-2 processor launched in June 1989 used wormhole routing with up to 4096 nodes, the 64-bit ALU nCUBE-3 was released in 1995, and the fourth generation MediaCUBE 4 in 1999. In January 2005, nCUBE was acquired by C-COR, and subsequently acquired by ARRIS in December 2007 [3].