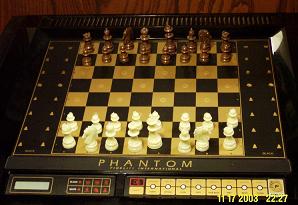 Fidelity Phantom,
a series of robot type dedicated chess computers by Fidelity Electronics with a 6502 program by Dan and Kathe Spracklen, released in three models since 1988, the normal Phantom (model 6100), and the talking Chesster Phantom (model 6124) and Chesster Phantom “Eyeball” (model 6126, “Hi I’m Chesster. How about a nice game of chess ...”) [2]. The Fidelity Phantom was basically a re-launch of the 1982 Milton Bradley Phantom with a Spracklen program within 64 KiB of ROM. Sidney Samole had bought the rights on the Robot from Milton Bradley International Inc.. After the acquisition of Fidelity Electronics by Hegener & Glaser in 1989, the same computer was sold under the new brand name Mephisto Phantom [3].