Difference between revisions of "CompuChess" 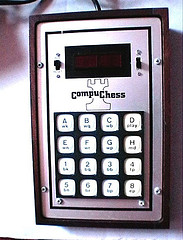 CompuChess,
an early dedicated chess computer with a Fairchild F8 8-Bit processor running at 1.78 MHz, with 2 KiB ROM and 256 bytes RAM, developed by David B. Goodrich & Associates from September 1976 until April 1977, manufactured by Data Cash Systems Inc. and market by a company called Staid Inc., also of Largo, Florida, available since November 1977 [2].

In 1978, an exact copy of the ROM appeared in the Novag Chess Champion MK I and Sugarman's JS&A computer [3], the ROM produced by the same manufacturer General Instruments Corporation, who informed Data Cash Systems on that incident in June 1978 [4]. Since Data Cash Systems didn't adequately protect their copyright, they lost their court case vs. JS&A Group [5] [6] [7], and then their appeal [8].