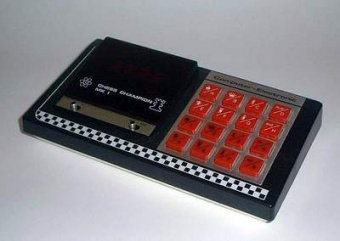 The Chess Champion MK I was Novag's first dedicated chess computer released in September 1978. It had a Fairchild F8 8-Bit processor running at 1.78 MHz, with 2 KiB ROM and 256 byte RAM.

The program was a clone of the Data Cash Systems Inc. CompuChess program, which was developed by David B. Goodrich & Associates [2] , while other sources assume David Levy was involved in the development [3] [4] .

Since the cloned software was already more than a year old, it was a weak program even for that early time. Additionally the program could only play with Black, accepted illegal moves, and could even play without Kings. With its strongest level 6, it usually replied not until several days with a move found [5]. It was marketed in the US by JS&A, and in Germany by Horten [6] and Quelle in different outward variations [7].

The MK I was sold in the USA by Joseph Sugarman's company as JS&A Chess computer. They challenged World Champion Anatoly Karpov and offered him $50,000 and a percentage of each unit sold. Karpov first rejected, and later accepted to endorse the game, but offered to let JS&A spend the money on advertisement to spread the word [8] [9] .

In 1979 Data Cash Systems took legal action against JS&A for breach of copyright [10] , which failed because it transpired that the copyright had not been adequately protected in terms of USA law [11] [12] [13] [14].

In the meantime Peter Auge had made his own arrangements with Anatoly Karpov, presumably with connections to FIDE president Florencio Campomanes and Alfred Kinzel, president of the German Chess Federation [15] [16], who was also involved the weak computer was distinguished in Germany with a "King's Diplom" [17]. Karpov appeared as advisor on the original Novag MK I boxes [18] [19]. The internals of Karpov's Novag advertisement salaries, not only for the MK I, but also subsequently the Chess Champion MK II [20], and Chess Champion Super System III [21], went public during the World Chess Championship 1985 when a first Spiegel article appeared in September 30, 1985, which according to Karpov was discrediting him, and the disturbance of the Jungwirth case [22][23] was allegedly one reason he lost the title to Kasparov, losing three of nine games short after in October 1985. Karpov's former German representative Helmut Jungwirth [24] was impeached of misappropriation of Karpov's salary afterwards [25]. Accordant to a further Spiegel article [26], Peter Auge had transcribed 22 checks to Jungwirth, in total $446,177.50 from December 8, 1978 to January 17, 1981. Jungwirth claimed he paid Karpov partly cash and was also endowed for other services, which Karpov categorical denied at a hearing of witnesses in Berlin. 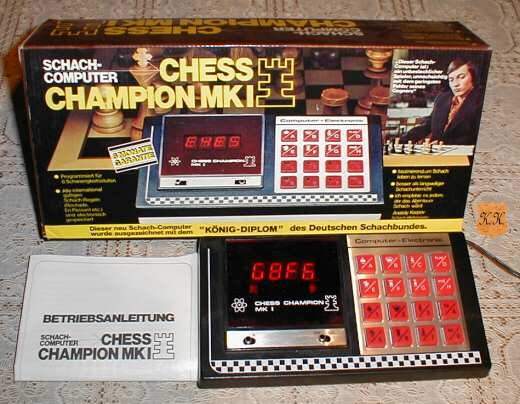