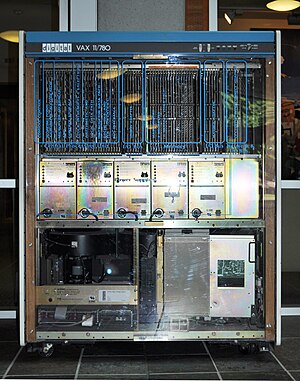 VAX, (Virtual Address Extension)
an instruction set architecture, developed by Digital Equipment Corporation (DEC) in the mid-1970s, to extend the PDP-11 architecture to a 32-bit orthogonal instruction set while adding a complete virtual memory system to the simple paging and memory protection of the PDP-11. The first computer to use a VAX CPU was the VAX-11/780, which DEC referred to as a Superminicomputer [2]. DEC's VAX strategy was formulated by Gordon Bell [3].

The general form of a VAX instruction ...

... has each component being one byte, the opcode a value in the range 0 - 255, and each operand consisting of two nibbles, the upper 4 bits specifying an addressing mode, and the lower 4 bits (usually) a register number (R0 - R15).

The MicroVAX was a family of low-end minicomputers implemented the VAX instruction set architecture, first introduced in 1984.