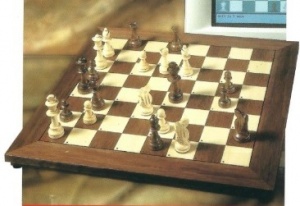 Saitek PC Auto Chessboard, (Kasparov PC Auto Chessboard, Mephisto PC Schachbrett)
a magnetic sensory wooden chess board released by Saitek in 1995 as dedicated chess user interface for the IBM PC, connected via the parallel port. The board was no own development but the housing of the Saitek President [2], and was bundled with Ed Schröder's MS-DOS program Mephisto Advantage [3] and was further compatible with Genius 3, Fritz 3, Rebel 6 and subsequent versions, and Virtua Chess. The board was shipped under the well known Mephisto trademark in German speaking countries as Mephisto PC Schachbrett, after Saitek acquired Hegener & Glaser in 1994. Nicolas Cominetti has written a WinBoard driver dubbed Autowb, hosted by Tim Mann [4], that made the Saitek Board WinBoard compatible.