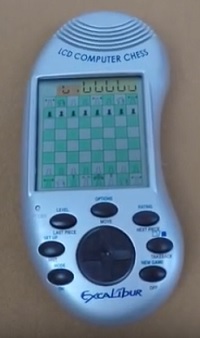 Excalibur LCD Chess, (Excalibur 375-1 LCD Computer Chess)
a dedicated travel chess computer by Excalibur Electronics, released in 2000 [2]. The computer consists of a Samsung KS57C21516 controller with a SAM47 4-bit core [3] at 1.5 MHz with 16 KiB ROM and 544 nibbles of RAM, and a LCD board and button panel including the central eight-direction rocker button to interact with the user. The program and the new housing was developed and designed by Ron Nelson during his sabbatical in late 1999 [4]. The 4-bit program applies sophisticated PV move and killer move ordering heuristics [5], to become the base program used for subsequent Excalibur models like King Arthur, Igor II, the Excalibur Chess Station, LCD Chess & Checkers and many others.

Excalibur's Talking LCD Chess on the other hand was a relative of the 6502 line of Nelson programs as used in Ivan II The Conqueror and Alexandra The Great. It was released in 2002 with a Sunplus SPL191B-063A controller at 3 MHz with 256 KiB ROM and 704 bytes RAM.