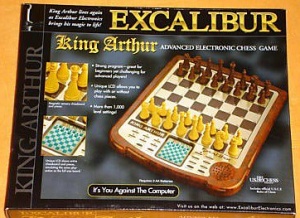 Excalibur King Arthur,
a dedicated chess computer by Excalibur Electronics, released in 2000 [2]. The computer has a Samsung S3C72P9 controller with a SAM47 4-bit core at 1.5 MHz with 32 KiB ROM and 1056 nibbles of RAM, and features a press sensory board along with a LCD board and button panel. The 4-bit program, developed by Ron Nelson during his sabbatical in late 1999 for the Excalibur LCD Chess [3], applies sophisticated PV move and killer move ordering heuristics [4], and was slightly customized for the new hardware.