Difference between revisions of "Werner Joho" 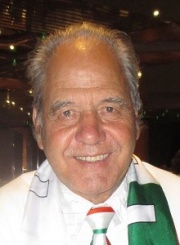 Werner Joho,
a Swiss physicist affiliated with the Division Large Research Facilities [2] of the Paul Scherrer Institute (PSI) in Villigen, Switzerland, before 1988 the Swiss Institute for Nuclear Physic (SIN) [3]. He received a Ph.D. in 1970 from ETH Zurich on the extraction of a 590 MeV proton beam from the SIN ring cyclotron [4], and was involved in developing of the Swiss Light Source [5].

In 1967/68, as Ph.D. student at ETH, along with Gerald Tripard and Gerhard Rudolf, Werner Joho was co-developer of the chess program Charly ("Chess heuristics and algorithms for relaxing lazy yodelers") running on a CDC 1604. While the computer was basically used for calculations to design magnets for the cyclotron, they used some extra weekend computer time for their work on chess [6]. In 1968, they asked Richard Greenblatt for a match versus Mac Hack VI. Three games were played in October and November 1968 via ham radio, all won by Mac Hack VI [7] [8].