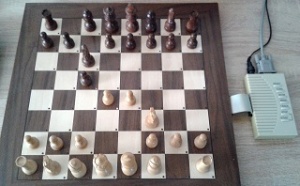 Chess 232 Board,
a magnetic sensory board with wooden pieces to play with PC chess programs, first released in late 1994, deprecated and out of stock [2]. The board was connected with the PC via a RS-323 serial COM port. It was developed in conjunction with his Auto232 interface, by Chrilly Donninger, using the same protocol [3] [4]. A MS-DOS TSR driver was able to "hook" the input and output of various chess programs. A later free Windows driver by Stefan Meyer-Kahlen allowed dedicated Chess 232 feeling with Windows engines [5].