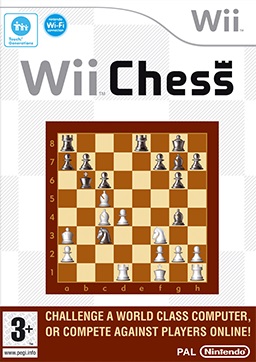 Wii Chess,
a chess program for Nintendo's Wii console. Wii's chess engine is based on Loop Express by Fritz Reul. In his Ph.D. thesis New Architectures in Computer Chess, Reul mentioned Wii Chess as implementation of Non-Bitboard Architectures based on a 15x12 Board representation due to lower performance and the 32-bit bandwidth of Nintendo’s PowerPC 750 CL based main processor [2]. Reul further acknowledged thesis supervisor Jaap van den Herik who set up the contact to Nintendo in 2007, which implemented Reul's source code successfully in Wii Chess [3]. Wii Chess was released on January 18, 2008 in Europe and on September 30, 2008 under the name Tsūshin Taikyoku: World Chess (通信対局 ワールドチェス) in Japan. No release in North America or Australia has been announced, making it the only game in the Wii series that was not released in these countries [4].