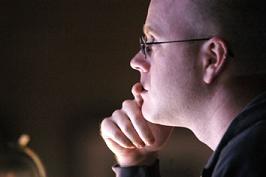 Jeremy Bernstein,
an American multimedia composer and programmer, comprising mostly sound, video and code. In various forms - performances, presentations and screenings - his work has been exhibited throughout Europe and North America. Jeremy Bernstein interests include chess and computer chess, he was poster and moderator at Talkchess CCC. As proponent of open discussions about clones, derivatives and engine origins, he founded the OpenChess Forum in June 2010 [2]. Further, Jeremy Bernstein contributed to the Komodo development such as in interfacing the probing code of Syzygy Bases in Komodo 7 [3] and generic stuff like threading, also responsible for the Android version since Komodo 8 [4].

Jeremy Bernstein is developer of Max/MSP, published by Cycling '74 in 1988. Max/MSP is an "add-on" package for Max, the visual programming language for music and multimedia, allowing for the manipulation of digital audio signals in real-time, to create own synthesizers and effect processors.

Jitter, published by Cycling '74 in 2002, and co-authored by Jeremy Bernstein, is a multidimensional data processing environment, a software being one of the leading standard programs for interactive application in the media fields of theatre, dance, installations, performances as well as DJ and VJ art.