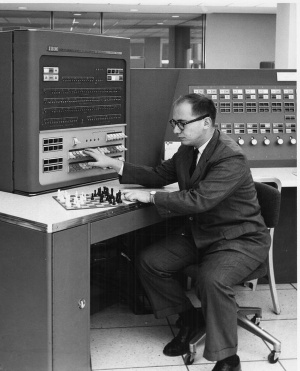 Quotes by Pamela McCorduck from Machines Who Think [6]

As mentioned by John McCarthy [7], the Bernstein Chess Program under construction was presented at the 1956 Dartmouth workshop:

The Bernstein Chess Program was the prototype of a selective forward pruning, Shannon Type B program. On an IBM 704, one of the last vacuum tube computers, it searched four plies minimax in around 8 minutes, considering seven most plausible moves from each position and evaluated material, mobility, area control and king defense [8].