Temporal Difference Learning, (TD learning)
is a machine learning method applied to multi-step prediction problems. As a prediction method primarily used for reinforcement learning, TD learning takes into account the fact that subsequent predictions are often correlated in some sense, while in supervised learning, one learns only from actually observed values. TD resembles Monte Carlo methods with dynamic programming techniques [1]. In the domain of computer games and computer chess, TD learning is applied through self play, subsequently predicting the probability of winning a game during the sequence of moves from the initial position until the end, to adjust weights for a more reliable prediction.

Each prediction is a single number, derived from a formula using adjustable weights of features, for instance a neural network most simply a single neuron perceptron, that is a linear evaluation function ... 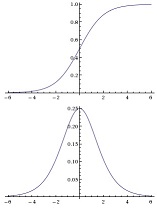 ... with the pawn advantage converted to a winning probability by the standard sigmoid squashing function, also topic in logistic regression in the domain of supervised learning and automated tuning, ...

... which has the advantage of its simple derivative:

Each pair of temporally successive predictions P at time step t and t+1 gives rise to a recommendation for weight changes, to converge Pt to Pt+1, first applied in the late 50s by Arthur Samuel in his Checkers player for automamated evaluation tuning [2]. This TD method was improved, generalized and formalized by Richard Sutton et al. in the 80s, the term Temporal Difference Learning coined in 1988 [3], also introducing the decay or recency parameter λ, where proportions of the score came from the outcome of Monte Carlo simulated games, tapering between bootstrapping (λ = 0) and Monte Carlo predictions (λ = 1), the latter equivalent to gradient descent on the mean squared error function. Weight adjustments in TD(λ) are made according to ...

... where P is the series of temporally successive predictions, w the set of adjustable weights. α is a parameter controlling the learning rate, also called step-size, ∇wPk [4] is the gradient, the vector of partial derivatives of Pt with respect of w. The process may be applied to any initial set of weights. Learning performance depends on λ and α, which have to be chosen appropriately for the domain. In principle, TD(λ) weight adjustments may be made after each move, or at any arbitrary interval. For game playing tasks the end of every game is a convenient point to actually alter the evaluation weights [5].

TD(λ) was famously applied by Gerald Tesauro in his Backgammon program TD-Gammon [6] [7], a stochastic game picking the action whose successor state minimizes the opponent's expected reward, i.e. looking one ply ahead.

In games like chess or Othello, due to their tactical nature, deep searches are necessary for expert performance. The problem has already been recognized and solved by Arthur Samuel but seemed to have been forgotten later on [8] - rediscovered independently by Don Beal and Martin C. Smith in 1997 [9], and by Jonathan Baxter, Andrew Tridgell, and Lex Weaver [10], who coined the term TD-Leaf. TD-Leaf is the adaption of TD(λ) to minimax search, where instead of the corresponding positions of the root the leaf nodes of the principal variation are considered in the weight adjustments. TD-Leaf was successfully used in evaluation tuning of chess programs [11], with KnightCap [12] and CilkChess as most prominent samples, while the latter used the improved Temporal Coherence Learning [13], which automatically adjusts α and λ [14].