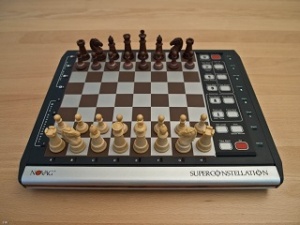 Super Constellation (Nickname Super Connie),
a dedicated chess computer with a 8-bit 6502 4Mhz CPU, 56 KB ROM and 4 KB RAM, manufactured and market in 1984 by Novag, running a program developed by primary author David Kittinger, supported by chess master Scott McDonald. It was the enhanced version of the Constellation and likely Novag's most successful computer, and famous for its entertaining, aggressive, speculative and "human like" playing style, often credited to its pre scan heuristics (PSH) [2].

Super Connie participated at the WMCCC 1983 in Budapest, and achieved the strong shared second to fourth place. During the Hong Kong human Blitz tournament March 1984, Super Constellation got 19/28 only playing Black, with 5 points versus International Masters in the 2355 to 2474 range, and was spontaneously called Blitz Monster, also competing at the WMCCC 1985 under that name [4] .