In August 2020, Fishtest revealed Stockfish NNUE was stronger than the classical one at least 80 Elo [11]. In July 2020, the playing code of NNUE was put into the official Stockfish repository as a branch for further development and examination. In August that playing code merged to the master branch and become an official part of the engine. However, the training code still remained in Nodchip's repository [12] [13]. On September 02, 2020, Stockfish 12 was released with a huge jump in playing strength due to the introduction of NNUE and further tuning [14].

The neural network consists of four layers. The input layer is heavily overparametrized, feeding in the board representation for all king placements per side [15].

The so called HalfKP structure consists of two halves covering input layer and first hidden layer, each half of the input layer associated to one of the two kings, cross coupled with the side to move or not to move halves of the first hidden layer. For each either black or white king placement, the 10 none king pieces on their particular squares are the boolean {0,1} inputs, along with a relict from Shogi piece drop (BONA_PIECE_ZERO), 64 x (64 x 10 + 1) = 41,024 inputs for each half, which are multiplied by a 16-bit integer weight vector for 256 outputs per half, in total, 256 x 41,024 = 10,502,144 weights. As emphasized by Ronald de Man in a CCC forum discussion [16], the input weights are arranged in such a way, that color flipped king-piece configurations in both halves share the same index. However, and that seems also a relict from Shogi with its 180 degrees rotational 9x9 board symmetry, instead of vertical flipping (xor 56), rotation is applied (xor 63) [17].

The efficiency of NNUE is due to incremental update of the input layer outputs in make and unmake move, where only a tiny fraction of its neurons need to be considered in case of none king moves. The remaining three layers with 2x256x32, 32x32 and 32x1 weights are computational less expensive, hidden layers apply a ReLu activation [18] [19], best calculated using appropriate SIMD instructions performing fast 8-bit/16-bit integer vector arithmetic, like MMX, SSE2 or AVX2 on x86/x86-64, or, if available, AVX-512. 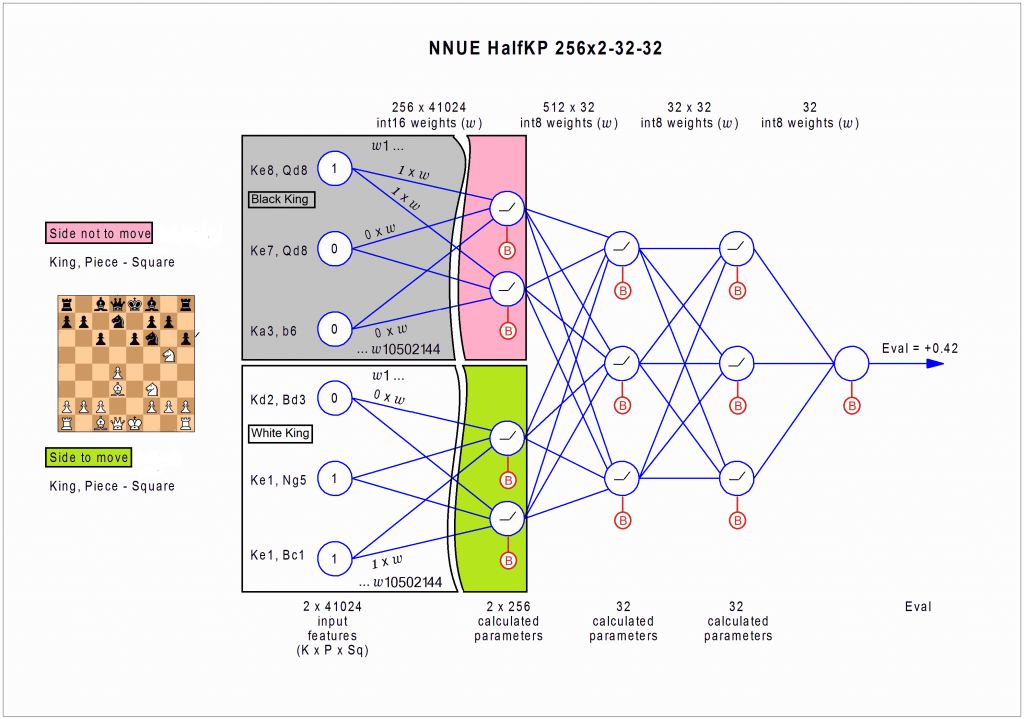 Explanation by Ronald de Man [21], who did the Stockfish NNUE port to CFish [22]:

All networks are built by some volunteers but not by any big community (differs from Leela Chess Zero) and can be uploaded into Fishtest for testing. Networks with good test results will be released officially on Fishtest website [23].

After long discussing the best way to publish networks with Stockfish [24], the developing team decided to embed the default network into Stockfish binaries, making sure NNUE always works as well as bringing more convenience to users.

In August 2020 a new patch changed Stockfish NNUE into a hybrid engine: it uses NNUE evaluation only on quite balanced material positions, otherwise uses the classical one. It could speed up to 10% and gain 20 Elo [25]. At that point, NNUE helped to increase already around 100 Elo for Stockfish. In the same month, Stockfish changed the default mode of using evaluation functions from classic to hybrid one, the last step to completely accept NNUE.

In reply to Unai Corzo, Motohiro Isozaki aka Yaneurao, suggested 3 techniques that applied successfully to Shogi and can be brought back to Stockfish NNUE and may improve it another 100 - 200 Elo [30] [31]: