Difference between revisions of "Sebastian Thrun" 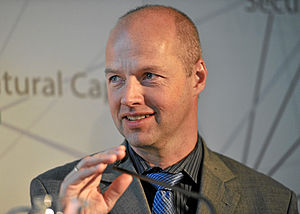 Sebastian Thrun,
an German computer scientits, robotics developer, research professor at Stanford University, and CEO of Udacity. Before he worked at Google Inc., where he co-developed Google Street View - and founded Google X, where he worked on the development of Google driverless car [2]. Sebastian Thrun holds a Ph.D. in computer science and statistics from University of Bonn in 1995 on the topic of Explanation-Based Neural Network Learning supervised by Armin Cremers and Tom Mitchell from Carnegie Mellon University, where Thrun continued his career as research computer scientist in the area of Machine Learning and Robotics.

Sebastian Thrun applied explanation-based neural networks (EBNN) to computer chess. His research chess program NeuroChess took its search algorithm from GNU Chess and its evaluation was based on the neural network [3] [4].