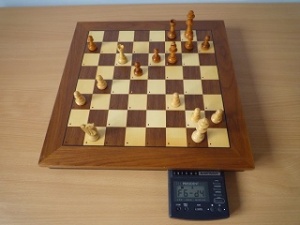 Saitek President, (Kasparov President)
a dedicated chess computer released in 1993 by Saitek, running a program by Frans Morsch on an 8-bit H8 processor with 32 KB ROM and 1 KB RAM, similar to the GK 2100. The computer is represented by a wooden sensory board with a pluggable control unit. The President board was later market separately as Saitek PC Auto Chessboard aka Mephisto PC Chessboard as user interface for PC chess programs [2]. The Saitek President played the Aegon 1995.