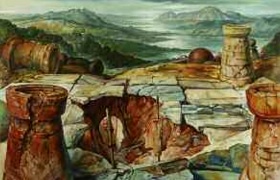 Rook Endgame,
an endgame with rooks and pawns only. They are a common type of endgame in practice, occurring in about 10 percent of all games, including ones that do not reach an endgame at all [2]. Many rook endgames have the reputation of being drawish, even with one or sometimes two pawns ahead as noted by the remark ‘All rook endgames are drawn’ [3] [4], which might be considered in evaluation by scaling the material balance by a factor of less than one.

While most programs rely on endgame tablebases , in [rook and pawn versus rook endgame, two type of positions are of particular interest whose basic features may be considered with some pattern matching to adjust the score accordantly. The Lucena position, finally "building the bridge" is a win for the pawn side, and the Philidor position is a draw. Most rook and pawn versus rook endgames reach either the Lucena or the Philidor position if played accurately [5].

In 2013 [6], John Nunn applied the 7-piece Lomonosov Tablebases to R+2P vs. R+P positions from the famous book Rook Endings, 2nd edition, by Levenfish and Smyslov [7], which was assumed to contain the truth and, owing to Nunn, this is no longer so.