Rival, (Rival Chess, NewRival)
a chess engine by Chris Moreton and Russell Newman, written in C++, starting in 1992 as MS-DOS program with an own GUI, before being rewritten for Windows as WinBoard compatible engine (NewRival) a couple of years later [2]. The UCI protocol was implemented in 2006 as Rival UCI 1.18 for Windows, while the current Rival engine was ported to Java as used in the Android application. DOS and Windows versions are available as source code [3]. Further, Rival is able to play various chess variants like Kinglet, Losing Chess, and Shatranj [4].

Rival is described in detail on the redhotpawn sites [5]. Rival for Java uses bitboards with big-endian rank-file mapping. It determines sliding piece attacks with magic bitboards [6] [7].

The evaluation function calculates scores of both sides, and returns the score difference of the side to move minus the side not on the move in negamax manner, considering pawn structure, various piece terms, and king safety. A quote from Rival's Static Board Evaluation site [8]: 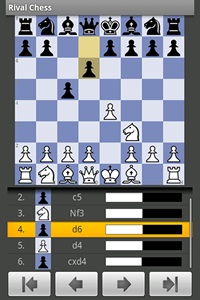