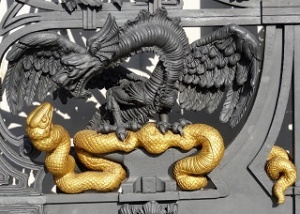 Dragon and Snake on ambos [1]

Playing Strength, (Performance, Skill Level)
of a chess player, or chess playing entity, program or engine, reflects the ability to win against other players, given by a number or other element of an ordered set such as an Elo number.

The ability to solve test-positions, that is, finding the specified, likely one and only best move, might be an indicator for various particular engine skills, but does not necessarily correlate with playing strength. In his Parallelism and Selectivity in Game Tree Search lecture, Tord Romstad introduced the Worst Moves Observation (WMO), which states the practical playing strength is not primarily determined by the quality of the players best moves nor average moves, but by the quality of the players worst moves.

A statistical valid method to measure playing strength within a defined confidence interval is to play an appropriate huge number of games with both sides versus a wide range of different opponents [2] with symmetric time constraints, and to apply match statistics. Performance isn't measured absolutely; it is inferred from wins, losses, and draws against other players or engines. Players' rating depend on the ratings of their opponents, and the results scored against them [3]. While relative playing strength of chess engines is not strictly transmissive over various time controls, the number of games played is more relevant than their duration, the todays de facto standard in measuring playing strength is parallel playing fast chess with (ultra) short time control, such as blitz, bullet or even lightning chess, as for instance used in the Fishtest framework of Stockfish [4].

The strength of a chess program depends on many things, the quality and efficiency of the algorithms involved to determine the best move of a position, the balance of the so called search versus knowledge tradeoff to evaluate or compare leaf nodes of a search tree, how to shape that tree and to propagate a score up to the root, and time management, that is how to allocate time for searching a move under time control requirements. Time used is roughly proportional to the number of visited nodes of the common depth-first search inside an iterative deepening frame, which grows exponentially by its effective branching factor raised to the power of search depth. Playing strength might be improved over the (playing) time due to learning algorithms.