Difference between revisions of "Phalanx" 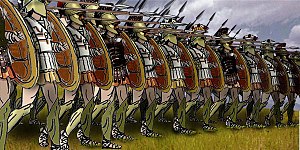 Phalanx,
an open source chess engine, originally released by a Czech student Dušan Dobeš under GPL, also available as Young Talent by ChessBase running under the Fritz6 GUI. In about 2000 the project has been abandoned [2] , but it was resurrected in 2006 by José de Paula Rodrigues [3] [4]. In October 2014, after fourteen years and nine months, Phalanx XXIII was released by Dušan Dobeš [5].

Phalanx's board is represented by a 10x12 mailbox with piece-lists. The search uses PVS with transposition table inside an iterative deepening centiply framework for fractional extensions and reductions without aspiration windows, performing state of the art null move pruning, late move reductions and futility pruning near the tips. Phalanx pioneered in tapered eval and speculatively computes both endgame and middlegame scores to balance them by total material. This prevents evaluation discontinuity when searching a position on the edge of middlegame and endgame. The static evaluation first extracts knowledge and prepares a color flipped board, and applies that knowledge in a second pass using the flipped board to do stuff for both sides with the same color independent code.