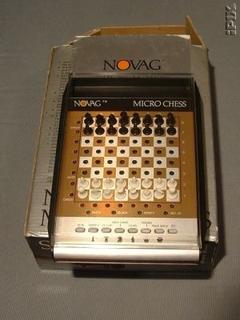 Novag Micro Chess,
one of Novag's first dedicated chess computer with a program by David Kittinger, first released in 1981. The computer has a Mostek MK3875/42 microcontroller [2] , a second sourced single chip implementation of the Fairchild F8 multi-chip processor, the 3850 ALU with 64 byte scratchpad RAM, which are 64 general purpose 8-bit registers [3] , and the 3851 program storage unit, instruction decoder and 4 Kibibyte mask-programmable ROM, and 64 byte executable RAM [4] [5] .The novelty of Novag Micro Chess was a sensor pegboard with membrane switches, which allows entering moves directly by pulling and sticking pieces on the board. Eight rank and file LEDs indicate origin- and target square of the move made internally by the computer.

David Kittinger had to solve a similar challenge than Mark Taylor with Mini Chess to write a chess program with such less RAM. Accordingly, the program was not that strong, and had 8 levels to search one to eight plies deep. It took 110 minutes to solve that mate in three [6] .

A Micro Chess prototype had a move generation bug due to castling over an attacked square, which of course occurred in its first tournament game at the CPWTIPC 1981, where Micro Chess lost a game from Chess Champion Mark IV [7] [8] [9] :