Difference between revisions of "Mephisto Vancouver" 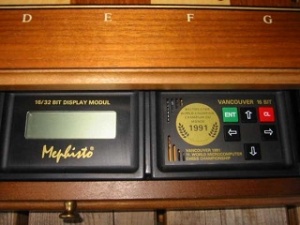 Mephisto Vancouver,
a set of dedicated chess computer modules by Hegener & Glaser for their Mephisto module systems with a program by Richard Lang, the successor of Mephisto Lyon on the way from Psion to Chess Genius collecting World Microcomputer Chess Championship titles. The seventh title of Richard Lang under the aegis of Mephisto or vice versa at the WMCCC 1991 in Vancouver in the Manufacturers group was per default, since there were no other competitors. In the Software group, Mephisto X aka Vancouver only became third. For a long time, since the WMCCC 1983, no Lang or Mephisto program won the microcomputer title in the software or commercial group - it was Ed Schröder's Gideon on an ARM2 plugin card, followed by Marty Hirsch's MChess on a PC, heralding an end of an era.

Improvements of the Mephisto Vancouver over the Lyon after only five months between the WMCCC 1990 and 1991, was due to tweaked evaluation with enhanced pawn structure knowledge and center control considerations, Vancouver will also recognize more lost pawn engings statically. The opening book was extended to 150,000 moves in 17,000 variations. The program has many options supported by the revised user interface dialogue system, to configure search and evaluation parameters, such as selectivity, relative point values and contempt factor.

Like with previous models, three Vancouver versions were shipped - with 68000 and 68020 processor, and the Mephisto Vancouver Tournament machines with 68030 processor [2].