Difference between revisions of "Lars Karlsson" 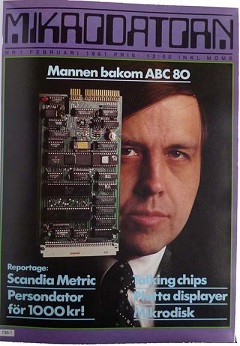 Lars Karlsson,
a Swedish electrical engineer, computer scientist and technologist, in 1970 founder of Dataindustrier AB (DIAB) [2]. They had the card computer Data Board 4680 as first product, incorporating an Intel 4004, a Motorola 6800 and an Intel 8080, later eventually a Zilog Z80 [3] [4], followed by the ABC 80 home computer. In 1983, DIAB began to build Unix servers that were sold both under their own name and as OEM products by Cromemco / Dynatech. The company was subsequently sold to Bull after a time with Ericsson and Televerket as owner, while Karlsson moved to DIAB's subsidiary in the US and devoted himself to developing compilers, and stayed.there in Los Altos, California, in northern Silicon Valley [5].