Difference between revisions of "Larry Kaufman" 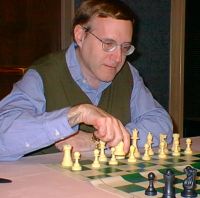 Lawrence (Larry) Charles Kaufman, (born November 15, 1947)
is an American chess Grandmaster [2] , chess writer, Shogi player, chess teacher, opening book author, and professional computer chess programmer with focus on evaluation. In 1965, while already a chess master and top rated U.S. Junior player and began to study economics at MIT, he started his computer chess career as opening book author of Richard Greenblatt's Mac Hack VI [3]. In the 80s and 90s, Larry Kaufman collaborated with Don Dailey and Julio Kaplan. Kaufman is well known for his research on material [4] [5] and his work and publication on The Evaluation of Material Imbalances [6] and doubled pawns [7] based on statistics. In 1993 as editor of ICD's Computer Chess Reports, Kaufman proposed a 25 problem test suite for chessplaying programs [8]. During the late 90s and early 2000s, Larry Kaufman was affiliated with Excalibur Electronics. He was chess consultant supporting Ron Nelson concerning evaluation, and responsible for the opening books of their dedicated chess computers [9] [10]. Larry Kaufman was member of the Rybka team around Vasik Rajlich, and successfully improved the evaluation of Rybka 3. He started again to work with Don Dailey on his new program Doch [11] and since 2010 on Komodo [12] [13]. After Don Dailey's death in November 2013, the work on Komodo continued with Mark Lefler, culminating with the release of the Dragon by Komodo Chess in November 2020 [14].

by Ron Nelson on his work with Larry Kaufman [19]: