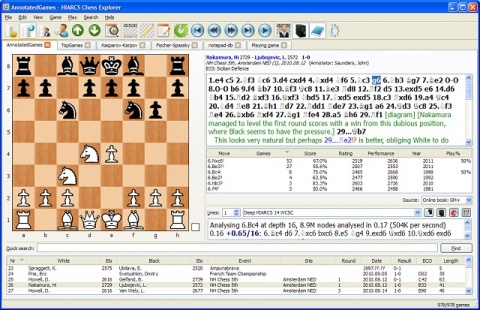 HIARCS (Hiarcs),
a chess engine written by Mark Uniacke. HIARCS is an acronym for Higher Intelligence Auto Response Chess System, and its history of development lasts over 30 years now. Because HIARCS is written portable in C, it is available for multiple platforms such as Pocket PC, Palm, Apple iPhone & iPod Touch, PDAs, PC and Macintosh computers.

HIARCS opening book authors over the time were Eric Hallsworth, Sebastian Böhme and Harvey Williamson, who is also operating HIARCS regular at various computer chess tournaments. HIARCS won the Gold medal at the 4th Computer Olympiad 1992 in London, the WMCCC 1993 in Munich, the IPCCC 2007, after the Rybka disqualification in 2011, the WCCC 2008 in Beijing, the ICT 2009, the WCSC 2011 in Tilburg, the WCSC 2013 in Yokohama [2], and the PT 51.

The very first version of HIARCS was already written 1980 in PDP-11 Basic, when Mark was a 15 year old schoolboy [3] . Subsequent versions (5 aka 0.5) were still written in interpreted Basic as well, and to compensate that speed disadvantage, HIARCS used to be smart rather than fast. Mark Uniacke from Now Walking, 1982-1983: HIARCS 5 [4] : 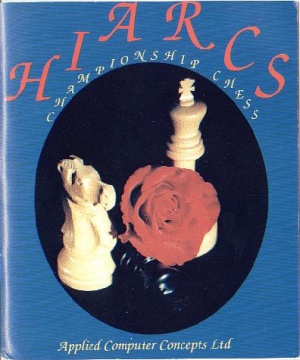 The rewritten HIARCS soon competed in computer chess tournaments, in 1989 the 1st Computer Olympiad, and the WMCCC 1991 in Vancouver where HIARCS won the title of the World Amateur Microcomputer Chess Champion. HIARCS won the gold medal (shared) at the 4th Computer Olympiad, and became World Microcomputer Chess Software Champion at the WMCCC 1993 in Munich. HIARCS won several other tournaments or got top rankings, it won the IPCCC 2007, after Rybka's disqualification in June 2011 the WCCC 2008, and the ICT 2009 [8]. Further, HIARCS is two time World Chess Software Champion, succeeding at the WCSC 2011 in Tilburg, and the WCSC 2013 in Yokohama.

from the ICGA tournament site [9] :

HIARCS is commercially available since 1991. PC- and Windows versions until 12.0 were market as ChessBase engine in conjunction with the Fritz GUI [10] , PC Chess HIARCS 13 UCI is purchased as download product from its own site [11] , and requires a Windows PC and an external GUI supporting the UCI protocol. HIARCS 12.1 and 13 are the chess engines of Pocket Fritz by ChessBase [12] [13] .

Since August 2012, HIARCS has its own GUI. The HIARCS Chess Explorer is bundled with HIARCS 14, based on the program which won the WCSC 2011, and can further be used with any UCI compatible chess engine [14] .