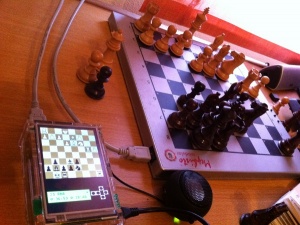 Gavon,
a portable, commercial chess system by Josu Bergara Ede with the look and feel of the dedicated chess computers of the 80's, using Windows tablet, Raspberry Pi, pcDuino, or ODROID with LCD and Keypad unit [2] or TFT displays, and a SD memory card with pre-installed open source chess engines, shipped via eBay. Gavon can be classified as a chess GUI similar to Arena or Scid vs. PC with the chess engines integrated. It is written in C, like the chess engines compiled for the ARM processor, running under Linux, supporting both the Universal Chess Interface and the Chess Engine Communication Protocol aka XBoard.