Difference between revisions of "Francesca" 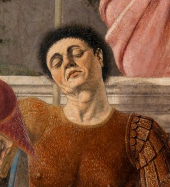 Francesca,
a chess engine by Tom King, written in C, which uses many state of the art chess-programming techniques. Francesca played five World Microcomputer Chess Championships from 1995 until 2000, including the WCCC 1999 with 4 out of 7, and wins against former champion MChess and draws against the massive parallel programs Zugwang and CilkChess. In 2000 Francesca was released as Chess Engine Communication Protocol compatible chess engine [2] and was further improved as Francesca MAD (Manic, Aggressive, Dynamic) [3].

Descriptions given from the ICGA tournament site [4] .