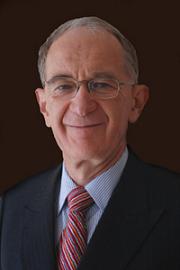 Eric Ernest Winkler,
a Swiss physicist, technologist, businessman and manufacturer of consumer electronics and dedicated chess computers, holding a MSc in Physics from ETH Zurich [2], in 1978, along with Peter Auge co-founder of Novag, and in 1979 founder and CEO of SciSys (Scientific Systems) located in Hong Kong, 1987 renamed to Saitek [3].

Saitek continued the Mephisto trademark after the acquisition of Hegener & Glaser in 1994 [4] and its entire business operations in 2000. At the H&G Extraordinary General Meeting in December 2000, it was decided to change the company's name from Hegener + Glaser AG to Stella Entertainment AG realizing 100% of the shares of the Broadway Musical Management GmbH (BMM), while Winkler concurrently resigned as member of the supervisory board. Stella became insolvent in 2002, partly acquired by Stage Entertainment - the German Mantelaktien-Report by Undervalued-Shares broached the issue [5].

In 2007, Saitek's Branded Products division was acquired at a price of 30 million Dollar by Mad Catz [6], while Winkler continued with his own company, electronics manufacturer Ryder Industries Ltd., Hong Kong, no longer in the dedicated chess computer business [7].

Eric Winkler was involved in various patent-registered inventions in the field of dedicated chess computers, for instance the Sensory Electronic Game which includes a board having a number of defined positions each provided with an isotropic field sensor such as a reed switch which has open and closed positions depending upon the presence or absence of a magnetic field, and two sets of playing pieces [8], the Thin Membrane Sensor Board as mentioned by Mike Watters [9], and the Configurable computer input device [10].